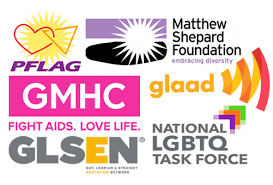 The following are a list of some of the major LGBT organizations in the United States.​

American Civil Liberties Union (ACLU): - "Founded in 1986, the Lesbian & Gay Rights Project and AIDS Project are a special division of the American Civil Liberties Union. The combined Project staff are experts in constitutional law and civil rights, specializing in sexual orientation, gender identity, and HIV." The site includes links to resources such as specific case profiles, essays written by project staff members, and free publications of the project.BiNet USA

Gay and Lesbian Alliance Against Defamation (GLAAD) - This organization focuses on promoting fair, accurate and inclusive media representation of the LGBT community.

Matthew Shepard Foundation - The principle of the Foundation is to teach parents with children who may be questioning their sexuality to love and accept them for who they are, and to not throw them away.

National Gay and Lesbian Task Force - "Founded in 1973, the National Gay and Lesbian Task Force Foundation (the Task Force) was the first national lesbian, gay, bisexual and transgender (LGBT) civil rights and advocacy organization and remains the movement's leading voice for freedom, justice, and equality. We work to build the grassroots political strength of our community by training state and local activists and leaders, working to strengthen the infrastructure of state and local allies, and organizing broad-based campaigns to build public support for complete equality for LGBT people." The site provides links to numerous documents and reports on topics such as (among others) marriage equality, demographics of same sex households in the U.S., social discrimination, and health issues.

Parents, Families, and Friends of Gays and Lesbians (PFLAG) - This organization "promotes the health and well-being of gay, lesbian, bisexual and transgender persons, their families and friends." The site provides links to numerous sources, including (among others), resources for LGBT communities of color.